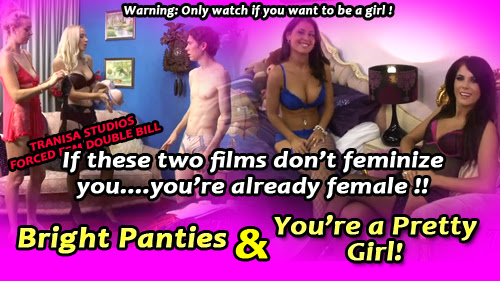 FILM 1 - A forced sissy panty wearing humiliation and feminization fantasy in Super high quality Samantha and Sapphire are relaxing in their bedroom wearing their finest lingerie. They have both just taken an IQ test and are very impressed with their results. Rory their lazy male housemate is soon invited to also take the test. Sapphire and Samantha are both convinced that women's IQ levels are higher than mens. Rory agrees to make a bet with the girls which he looses resulting in his full sissification and forced feminisation training to the girls' delight.

"I downloaded and watched all three of the (new Tranisa) films, they were nothing short of exceptional, I loved them totally. Some of your best yet it is fabulous."